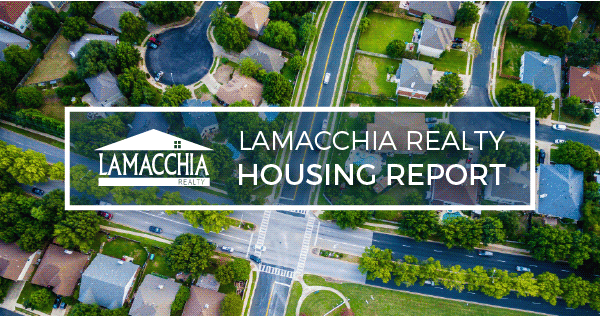 The Lamacchia Housing Report presents overall home sale statistics and highlights the average sale prices for single families, condominiums, and multi-family homes in Massachusetts and Southern New Hampshire for October 2017 compared to October 2016. It also looks at other metrics in Massachusetts like Homes Listed and Pending, as they are often the best indicators for predicting future trends in the market.

Massachusetts home sales increased almost 7% in October 2017 from October 2016, which at the time showed a decrease of 3% from the year before. 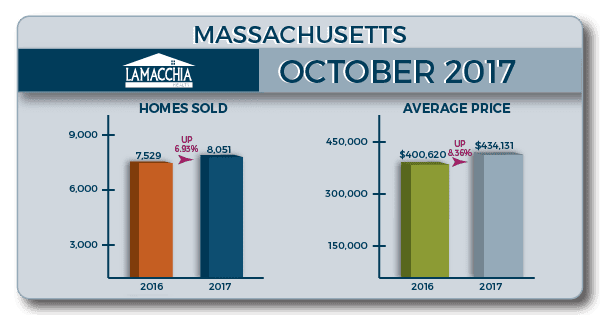 There were 12,858 homes listed for sale in Massachusetts in October 2017 compared to 11,893 in October 2016 which represents an 8.11% increase.  Early October had a lot of listing activity and although the pending statistics are up they didn’t all sell. But no doubt there was a period in late September and early October that inventory of homes for sale reached its highest point all year.

There were 11,135 homes that went pending in October 2017 according to MLSPIN, compared to 10,661 in October 2016, which represents an increase of almost 4.5%.  With both listed and pending sales number up in October, we could see a steady increase in home sales for November.

Last month, we predicted that sales could increase for October if buyers took advantage of the available inventory, which they did.  As trends depict, fall is the best time to buy before November likely brings a drop in inventory.  That drop in inventory is beneficial to sellers as buyers begin to compete for the homes listed on the market through the holidays.  It’s a misconception that the market freezes in the winter, as homes do sell during the holidays, as explained in our Myth Buster blog.   As mentioned in last month’s housing report, listing now is still opportune for sellers, as buyers who are out there now are extremely motivated to close on or before the holidays.  If this is something you’re considering, contact one of our expert Realtors and read our blog on the best ways to prepare for selling in the winter.