The Lamacchia Housing Report presents overall home sale statistics and highlights the average sale prices for single families, condominiums, and multi-family homes in Massachusetts and Southern New Hampshire for November 2017 compared to November 2016. It also looks at other metrics in Massachusetts like Homes Listed and Pending, as they are often the best indicators for predicting future trends in the market. 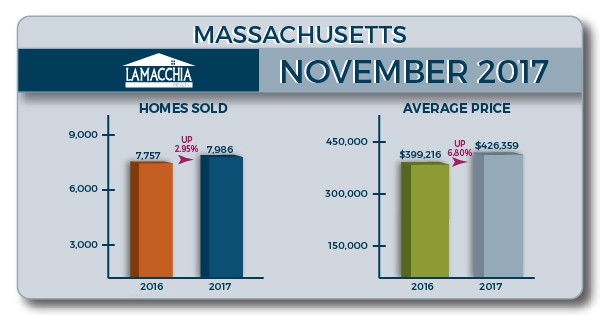 In November of this year 6,399 homes were listed for sale in Massachusetts compared to 5,996 in 2016, showing a 6.72% increase.  That’s almost half the number homes listed just last month which is to be expected, given the trends in diminishing inventory during the winter months.  Click here to read a blog on inventory trends. 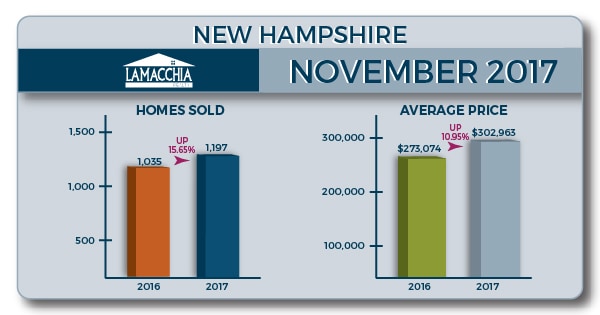 The year is ending very much like last year with a decent amount market activity but actually an even lower inventory of homes for sale. In fact, there are about 10% less homes on the market than there were a year ago when that was the lowest inventory since 2000.  With this said it is clear that early January will be worse and by February buyers will be even more frustrated than this past year with all the bidding wars. It is best for buyers to get themselves.  If you are a seller at this point it doesn’t really make sense to come off the market because homes do still sell in the end of December and the beginning of January, as explained in our holiday Mythbuster blog, and it’s worth a read if you’re considering listing now.

The other good news for the market is that Tax Reform has passed and it didn’t really change very much for real estate as Anthony Lamacchia explained in this news segment on NBC the other night.

Contact one of our expert Realtors to list and read our blog on the best ways to prepare for selling in the winter.