The Lamacchia Housing Report presents overall home sale statistics and highlights the average sale prices for single families, condominiums, and multi-family homes in Massachusetts and Southern New Hampshire for January 2018 compared to January 2017. It also looks at other metrics in Massachusetts like Homes Listed and Pending, as they are often the best indicators for predicting future trends in the market. 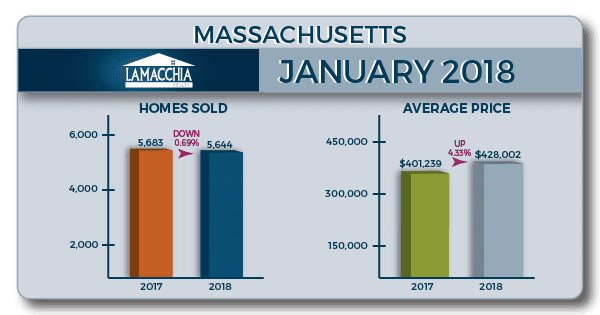 In January 2017, 6,292 homes were listed for sale in Massachusetts compared to 5,461 in 2018, showing a 13.21% decrease which is no surprise, given that we are seeing the lowest inventory ever recorded, and that the national percentages are down as well, the typical trends in diminishing inventory during the winter months tend to make this happen as well.  Click here to read a blog on inventory trends. 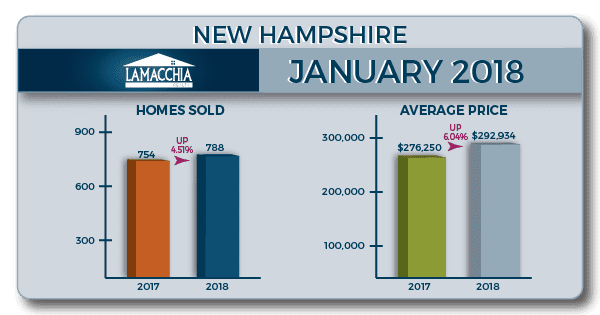 This year is beginning as predicted, with low inventory, diminished home sales (in MA) and a strong increase in prices for homes.  Demand is high, and that competition drives up prices- generally through bidding wars.  Sellers are in the optimal position to put their homes on the market, so they can take advantage of winter’s competitive market.  As mentioned earlier, it’s a national trend that home sales are down, attributed to the lack of single-family homes listed on the market, and sellers being nervous to list their home, sell and then have no home to purchase due to the lack of inventory.  This cycle at this point has become the norm and we can only hope that spring brings a rise in homes for sale.  Until then, buyers need to be ready to strike and win a bidding war with the first step being to meet with an experienced agent who has the knowledge to be ultra-competitive in this bidding war prone market.