The Lamacchia Housing Report presents overall home sale statistics and highlights the average sale prices for single families, condominiums, and multi-family homes in Massachusetts and Southern New Hampshire for April 2018 compared to April 2017. It also looks at other metrics in Massachusetts like Homes Listed For Sale and Homes Pending, as they are often the best indicators for predicting future trends in the market. 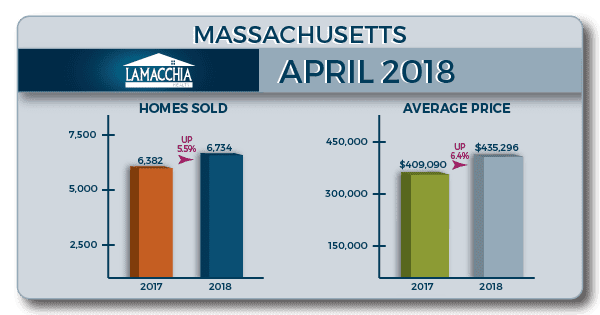 In our March 2017 Housing Report, with numbers down as they were, we believed we were likely to see this month’s numbers down again which didn’t end up coming to fruition.  Numbers are up in every category in Massachusetts, including the number of homes that went pending and were listed.  Hopefully, this means the market is hitting its stride for the next few months, so buyers can start to see some selection and sellers will be less concerned about listing and selling before they find the home they want.  Sellers should list immediately to take advantage of the low housing inventory before it ramps up and buyers should be happy that the next few months will likely have homes listed in greater abundance as the market tries to find balance.