The Lamacchia Housing Report presents overall home sale statistics and highlights the average sale prices for single families, condominiums, and multi-family homes in Massachusetts and Southern New Hampshire for June 2018 compared to June 2017. It also looks at other metrics in Massachusetts like Homes Listed For Sale and Homes Pending, as they are often the best indicators for predicting future trends in the market. 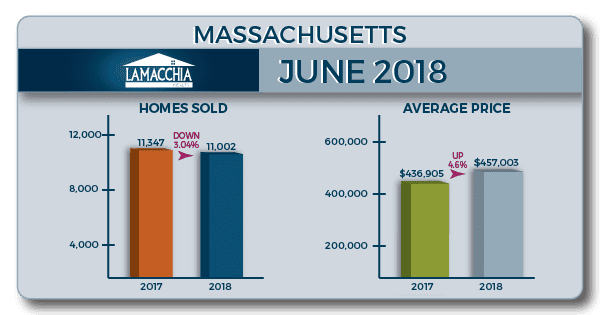 In June 2017 11,364 homes were listed for sale in Massachusetts compared to 11,698 in 2018, showing a 2.94% increase.  This depicts the market continuing its swing into balance, as more homes are available on the market.

There were 10,669 homes that went pending in June 2017 and 10,619 in June 2018 showing a .47% decrease.  Like last month which also had a slight decrease in pending sales. This is because inventory was much lower all winter and spring mostly due to scared sellers.  In addition in late June as a result of inventory finally rising, homes aren’t selling as quickly now that more homes are available.  Now that we are into summer Buyers usually have a little more time to make offers. 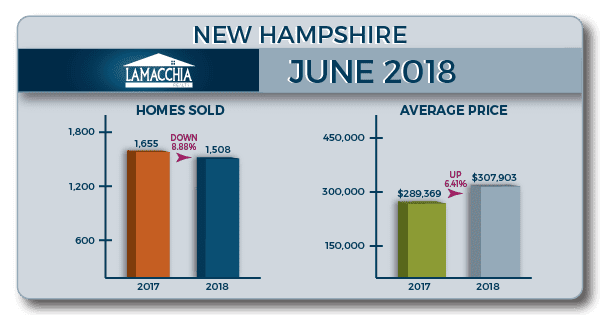 June 2018 is looking much like the May 2018 Housing report in that pending’s are down and listeds are up.  The same factors are at play here; more homes on the market are taking longer to sell because buyers have time to be choosy.  Buyers aren’t competing as much as they had to in the winter and early spring.  Home sales showing a decrease this month isn’t too surprising, given that pending’s were down in May, and with them down- albeit slightly- again this month may mean that August may see a similar pattern.

This does not mean we are suddenly into a buyers’ market but it is just not as strong of a sellers’ market as it was.  We are seeing more of a need for price adjustments as homes are staying on the market for longer, so sellers should remember that the lack of bidding wars may mean their home isn’t going to sell as fast and for as much, and buyers should keep in mind that there’s not necessarily something wrong with a home because it’s been available for longer than what we experienced in winter.