2018 was a historic year for the housing market where the six-year streak of lowering inventory finally snapped.  It came as a surprise to many, but it had to happen.  The year started with the lowest inventory of homes for sale in the history of Massachusetts with only 11,000 homes for sale on January 3rd. This created a busy winter and spring full of Bidding wars, buyers paying over asking price, and a plethora of frustrated buyers and Realtors all over the country. 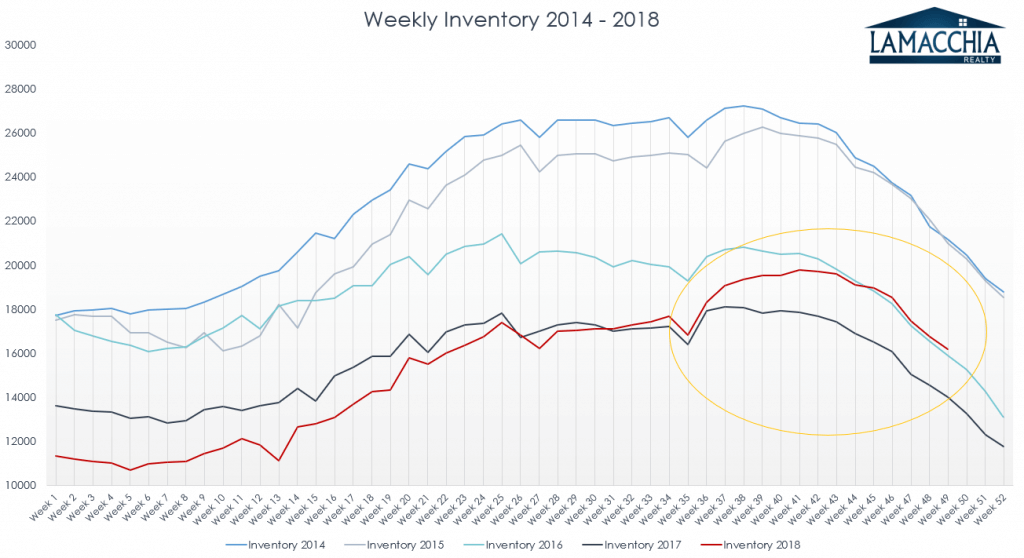 This was the first time it had happened since 2012. In early September, I wrote an op-ed article, 3 Reasons the Real Estate Market has finally changed, to explain what was going on and how inventory had finally flipped.  Fall was, for the most part, lackluster as inventory peaked with 19,766 homes for sale in early October which was more homes for sale than both 2017 and 2016 during the same timeframe.  Home sales were dipping and there were noticeably more price adjustments. In fact, the percentage of Price Adjustments to homes listed showed that price adjustments were up 9 out of 11 months this year as of the end of November.  In addition, homes that were expired or canceled in October and November were both higher than last year, as more home sellers gave up on selling and likely took their homes off the market for the Holidays.

It means that 2019 will be the best year to be a home buyer in about 4 years.  This will be especially true in the spring when Bidding wars usually peak.  There are four key areas both buyers and sellers should be aware of going into 2019.

The number of homes for sale in early January will be higher than January of 2018 and possibly higher than January of 2017 as well.  This is very important to consider because that will likely set us up for a spring market much like the spring of 2016 which was much more active.  Historically speaking, our inventory was very low even then and is still very low as you can see in the bar graph below, but the improvement will be felt by both homebuyers who were looking last year and didn’t land a home and especially their Realtors.  With inventory being similar to 2016 and if demand stays strong (which all indicators say it will) it still won’t leave very much slack in the market.  Demand has decreased since earlier in the year due to interest rates rising, the stock market declining, and mid-term elections- which always seem to cause a slower market just like they did in the fall of 2014.  However, despite those factors causing a slight decrease now, demand will increase dramatically after the first of the year as it always does especially as inventory rises.

Higher inventory means buyers have more choices.  A slightly slower economy also means less demand. Both factors are very good news for buyers. Don’t be fooled into thinking there won’t be any bidding wars because there will be many especially in the late winter and early spring as usual- albeit lower than spring 2018 but they will still happen. Most homes won’t sell for as much over asking as they were selling for this year.

Rates have gone up about a full point in the last twelve months.  It’s been pretty much continuous all year. However, over the last three weeks, they have dipped back down about a quarter point.  Why?  This is the upside of our stock market taking a bit of a beating. Always remember, as a general rule, the better the stock market does, the more rates go up the worse it does, the more rates go down.  Since we are in a bit of a dip in the economy partly due to the trade disputes, the market has slowed a bit and the Fed has backed off their messaging of continuing to raise rates into 2019. The stock market’s slow down has cooled bond markets and caused rates to dip to their lowest level since August. Based on unemployment and quarterly QDP reports I am doubtful that we will see a full-blown recession (three consecutive quarters of negative growth). Although if we did, that would drive rates down once again.

One of the issues many sellers who have wanted to upgrade have had over the last couple of years is they were scared their home would sell too fast to find the home they wanted. We have referred to them as Want-to-be sellers.  With more inventory and a slightly slower market, it will be much easier and less intimating for a seller to take the leap of selling and buying the new home they want.  Therefore, I believe Sell/Buys will increase. More buyers should have bought homes this past fall as it is the best time of year to buy a home.  Unfortunately, when the market adjusted and many homes didn’t sell right away, many buyers were fooled into thinking that there had to be something wrong with the house, as we explained in our blog in early October, “No there is nothing wrong with THAT house.”

It appears that sales in 2018 will end up slightly lower than in 2017.  I think that overall homes sold in 2019 will be higher than in 2018 mostly due to the increased inventory.  The increased inventory will loosen things up a bit and enable more buyers to land homes which was what held the market back in early 2018.  If sellers are smart, they will list early in the winter when inventory will be at its lowest point of the year and buyers tend to compete.  Bottom line, I do not think it will be a bad year for anyone but it will undoubtedly be a better year for buyers.