You Can Get More For Less in These Suburban Towns

Anyone who lives in Massachusetts will tell you it’s the absolute best place to live and raise a family. The further from Boston you get, the more you can get for your money when buying a home. And really, nothing is too far away from the city when you’re already in Massachusetts. Suburban towns in Massachusetts are very up and coming, and most make for the best property value for your future home. Can you imagine buying a beautiful three-bedroom, two-bathroom home for less than $500,000 30 minutes outside of a major city? Houses in cities are often more expensive because of basic supply and demand. The prices go up for these homes because more people want them. Living in a larger home further away from the city is the best way to get more bang for your buck.

We took a look at five towns and cities outside of Boston to compare prices for a three-bedroom, two-bathroom single family home:

In Norfolk county, MA, Millis is a small town about 50 minutes south west of Boston. Millis is a hot area for real estate right now. You can find so many picturesque houses for a great deal. According to the TownCharts website, in 2017 the town of Millis boasted 8,144 residents. The average price for a three-bedroom, two-bathroom single family home in Millis comes to $396,768.

Millbury is in Worcester County, MA, so it’s a little under an hour drive to Boston. The further you get away from the city, the more spacious the areas typically are. Many of the houses up for sale in Millbury right now are over 2,000 square feet because of the amount of land each one has. Because the town is about an hour away from the city, the price is drastically lowered for these homes compared to those within the city limits. The average price for a three-bedroom, two-bathroom single family home comes in at $329,494.

Lunenburg is also in Worcester County, MA, just over an hour and ten minutes from Boston. Like Millbury, Lunenburg offers many homes with over 2,000 square foot homes; however, the many colonial-style homes are almost 4,000 square feet and sit on several acres of land. The average price for a three-bedroom, two-bathroom single family home is $336,851.

Framingham is within Middlesex County in Massachusetts, about 45 minutes from Boston. The 25 square mile city houses Framingham State University and is still large enough for its population of about 72,000 residents and their larger homes. Property size in Framingham is usually over 2,000 square feet, which is significant for a highly populated city. The average price for a three-bedroom, two-bathroom single family home in Framingham comes to $430,613.

Billerica is located in Middlesex County, MA, also about 45 minutes north west of Boston.  The town spans about 26 square miles and has a population of around 40,000 people.  Many people flock to Billerica due to the suburban feel, yet still like the ease of access to Boston by car and train.  The average price for a three-bedroom, two-bathroom single family home comes in at $447,331.

Waltham is a smaller town 30 minutes west of Boston. While Waltham is a hot area for real estate right now, the average price for a three-bedroom, two full bathroom single family home is $594,098, much more than the cities and towns noted above. The amount of land per property significantly decreases as well due to the increase in demand for housing in the area. 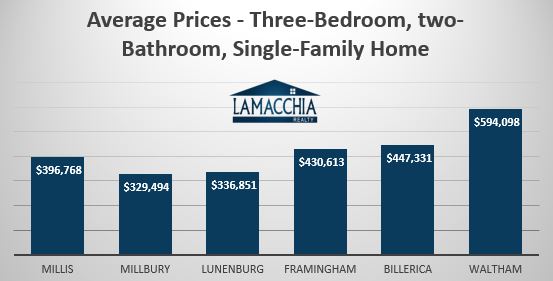 Homes in Millis, Millbury, Lunenburg, Framingham, Billerica, and the surrounding towns allow for the most bang for your buck.  Each offer larger homes and more land for less money, giving homebuyers the opportunity to get the most out of their purchase.