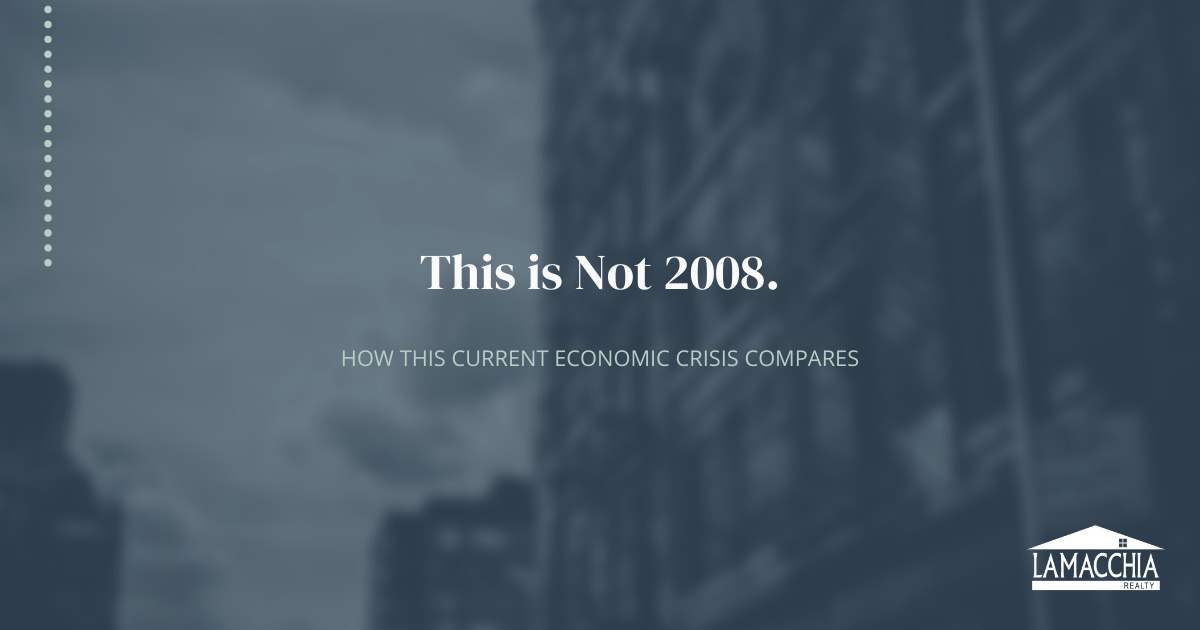 There has been a lot of concern that the COVID-19 Outbreak will incite a real estate market nosedive similar to what happened in the 2008 Housing Crisis.  Though COVID-19 has certainly caused a massive slowdown in the market- mainly due to a lack of home sellers listing their homes- assuming that this will turn into a replay of the 2008 crisis is likely inaccurate. 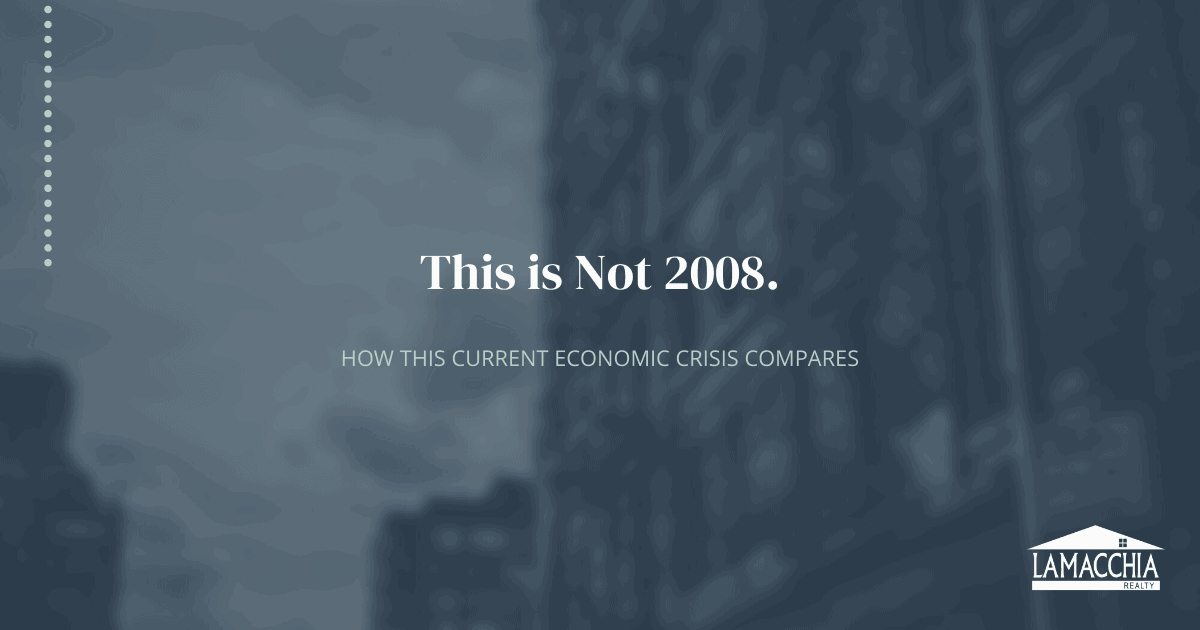 The amount of homes for sale is by far the leading indicator to tell us what’s going on in the market.  Always remember real estate values and the entire industry is simply based on supply and demand.  In 2008, the housing market started to crumble as inventory rose so high that almost no sellers could sell their homes.  List prices subsequently declined which brought home values with them.  People were upside down on their mortgages with no hopes of selling for anywhere near what they paid if they bought the home a year or two prior and many were very quickly upside down.  Too much supply, almost no demand.

To further reinforce this point, look at 2020 in the weekly inventory chart below. As you can see, because 2020 inventory started lower than ever before, there simply is no slack in the market to cause a drop in prices at this time, therefore the fear that homeowners will be upside down is not currently based in fact.  High demand and limited supply is the opposite set of circumstances to 2008. 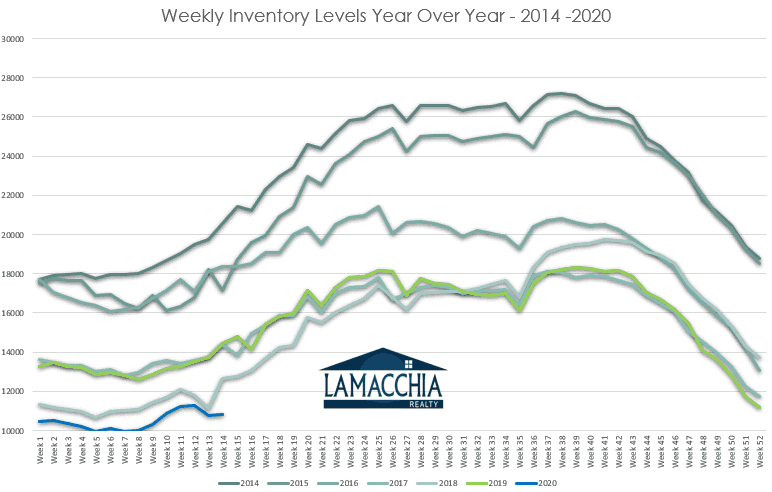 In 2008, delinquencies had already been climbing steadily since 2006 and continued to climb until 2010.  By 2008, the storm had enough strength to continue for two more years which put the market into crisis mode.

Right now, mortgage delinquencies have been declining since 2010, so even though the virus will cause a rise starting in April due to the massive layoffs and increasing unemployment, the level of delinquencies is kicking off at a twelve-year low.  In addition, most people are obtaining permission to not pay for at least three months by way of obtaining a forbearance on their mortgage. These forbearances will not count as delinquent because they will not even be reported to credit. 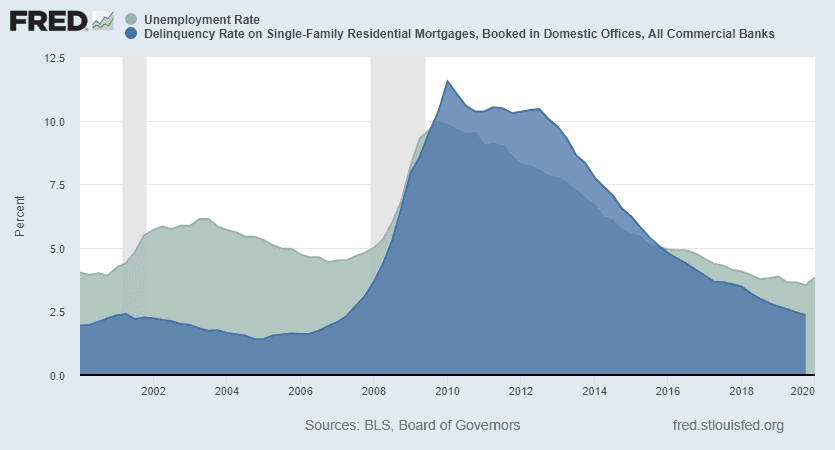 The financial health of the mortgage market is in much better standing now than it was in 2008.  For starters, the median credit score in 2008 was 731 and in 2019 it was 770.  Higher credit scores ultimately mean that buyers are more qualified to borrow, which was not the case leading up to 2008, particularly with the predatory lending that was happening up until about 2007.  Many mortgages at the time were given to underqualified borrowers who would never qualify for the same loan today so a portion of the sales were built up on that.  Furthermore, the total debt balance in 2008 was only 40 billion dollars less than what it is now- 9.89 trillion in 2008 compared to 9.95 trillion in the end of 2019.  As sale prices have steadily increased in the wake of the housing crisis and are much higher now- see graph below, they’ve doubled since 2000- the fact that the debt balance of mortgages and home equity loans combined is relatively the same 12 years later when values of homes are almost doubled speaks favorably about people’s equity positions and the kind of borrowing that has been going on.  It essentially means that more people have higher equity in their homes.  In fact, in 2009 negative equity peaked at 26% nationally and in 2019 it was down to 3.5%.

The Great Recession of 2008 was exacerbated by a lack of intervention by the banks, which themselves were falling apart.  Distressed borrowers would contact their mortgage companies to apply for forbearance, and if they could even get in touch would be told that they’d have to be delinquent to be granted forbearance or a loan modification so they’d go delinquent by intentionally missing payments, and then call back only to be told by another person that because they’re delinquent they couldn’t qualify. This broken loop would push people into foreclosure.

In fact, it took until 2011, three years, for the banks to align themselves with the people and start intervening- and if you look at all the charts, right around 2011 is when all the declines started to turn around.

Conversely, in the wake of this outbreak and its subsequent layoffs, furloughs, and most notably, sickness, mortgage companies with government-sponsored loans were very quickly mandated to allow forbearances without even a requirement for validation of hardship.  Forbearance requests have since increased by almost 2,000% in the past month so borrowers could be granted a minimum 90-day delay of mortgage payments which will be added to the end of the mortgage loan term or re-amortized into the existing term. Mortgage companies, however, due to the epic surge in requests, are becoming harder for borrowers to connect with due to extended response times.

A mortgage is delinquent when the borrower doesn’t pay for an extended amount of time, but forbearances are a short term agreed-upon timeframe between the borrower and the lender and prevents the mortgage from becoming delinquent.  After the period of non-payment ends, the borrower will repay.  If the delinquency lasts an extended period of time, generally 180 days, the mortgage can go into default and the borrower will eventually be foreclosed on and lose the property.  To avoid foreclosure, short sales tend to occur.  Short sales are when banks allow the borrower to sell for less than the mortgage value and the bank either forgives the difference or the borrower must pay it.  The years following the 2008 housing crisis saw a massive amount of short sales and foreclosures which these recent government mandates are designed to avoid.

The surge of forbearance requests is a sure signal of distress for homeowners but is a burning flare for mortgage servicers.  Though relief for servicers has been enacted where they can apply for advances to cover their own payments, it doesn’t cover the deficiency in receivables which is concerning.  The hope is that this virus lock-down ends soon enough where this is a short-term experience for all involved.  If it is, people will get back to work- slowly and carefully of course- thereby lowering unemployment and decreasing the need for forbearances.  If that happens, though a slowdown is inevitable at this point, the screeching backspin of the Great Recession will not happen.

It’s fair to say that the immediacy of government intervention is as unprecedented as the virus itself.  Literally no time has been wasted in the deployment of relief programs offered by the government. The $2 trillion Cares Act has many benefits for consumers and businesses starting with unemployment which now gives people an extra $600 a month and even offers 1099 employees unemployment, which has never been done before.  Another brand-new development is the Paycheck Protection Program, where the government is paying companies upwards of two and a half months of their payroll to keep employees on.  Furthermore, the Federal Reserve is already buying tremendous amounts of mortgage-backed securities in what has already amounted to more than what they bought in the three years following 2008. The Fed also just announced the new Main Street Lending Program to provide loans of $1 million or more to larger companies who didn’t have access to the Paycheck Protection Program, which services businesses of 500 employees or less.

The government is essentially doing everything differently this time around. Last time there were big signs of a major slowdown starting in 2006 but it took until the fall of 2008 for the government to make major moves and put major backstops in place to stop the bleeding. This time they are doing it already.

Is it going to be another housing crash?

This is absolutely an economic crisis- you can’t really call it anything else. But as you can see this time is a lot different so it is doubtful that prices will even come close to falling off a cliff like they did last time. We will continue to monitor inventory closely and we will be the first ones to report if we feel the tides begin to turn.