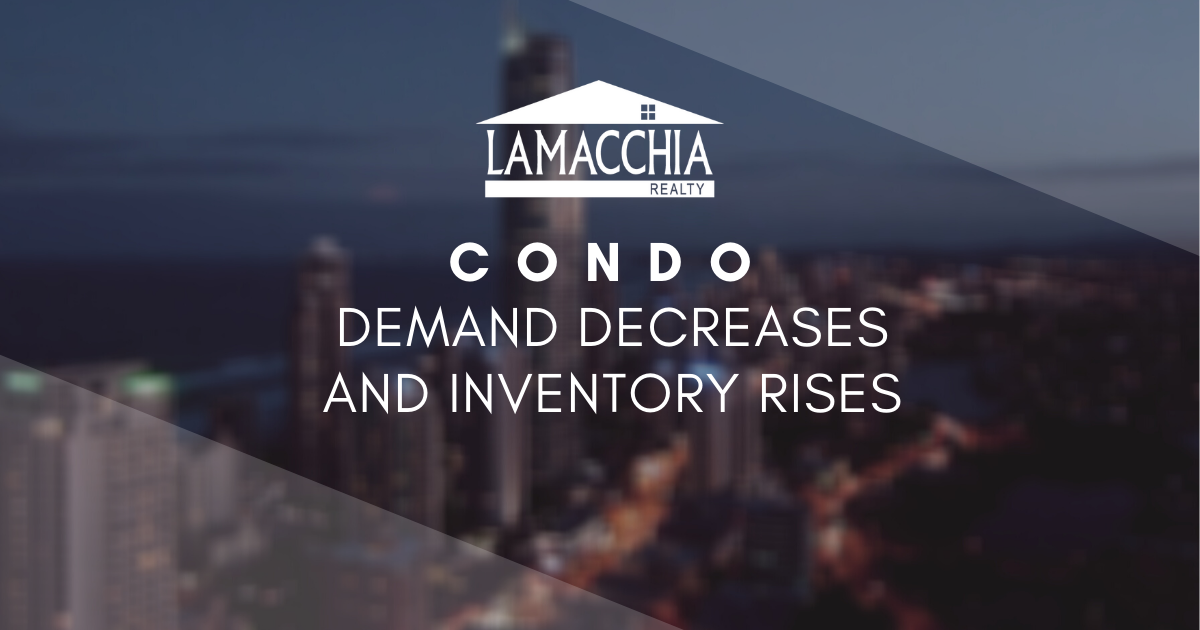 The tectonic shift in normal housing trends as a result of the current times has a new symptom: people are selling their condos and moving to single-family homes.  Shared communal living in condos is, at least temporarily, not something that as many people want these days. This makes total sense with the social distancing requirements that won’t soon disappear.

Historically, the local condo market is heavily driven by activity in urban centers, like Boston, Cambridge, and Somerville. Coincidentally, these areas had some of the strictest quarantine guidelines in the state last month, which seems to have been a major contributor to the statewide decline in condo sales, said Tim Warren, Warren Group CEO.

The slight increase in condo inventory over the past couple of months since COVID-19 struck, as shown in the graph below, is very likely related to the decrease in single-family inventory.  The more people purchase single families, the quicker inventory decreases which is a phenomenon referred to as Absorption Rate. Overall, the trend line for condos is relatively consistent without any major spike, but recent activity shows that buyers aren’t buying as many condos as single families now. 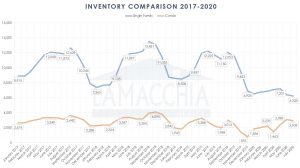 That’s not the only reason we are seeing inventory down for single families: people aren’t listing single families as much this year as they were last year.  In the chart below, you can see that between January 1, 2019 and June 30, 2019 there were 38,721 single-family homes listed and in the same time frame in 2020, there were 30,966 listed.  That’s a 20% drop in the number of listings. 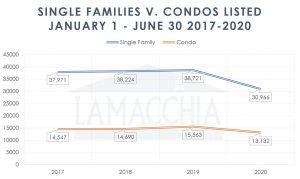 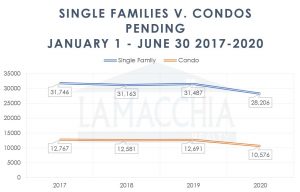 This chart below is perhaps the most telling.  Look at the downward trend of condos versus the steep incline of single families. 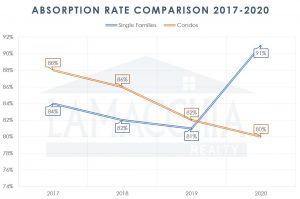 It’s been very clear the buyer activity across the board has outweighed seller activity.  Historically low mortgage rates are a big factor in this, and with such a lack of supply, a lot of sellers are concerned that they’ll sell without enough time to secure a home they want to move into, much less beat out the heavy competition on it.  The pandemic has created a litany of unpredicted housing activity this year and ironically all we can do at this point is to predict what we’ll see in the next six months based on current data.  There’s nothing like this in the past that we can draw from to base any predictions on.  This is clearly not 2008, as back then the housing market all but failed and now it’s busier than ever.  At this point it’s plausible that once all the current buyers secure homes, the demand will decrease a bit, allowing for more inventory and a less competitive market, but only time will tell.

We don’t expect this to be a long-term trend, but it’s likely to stick around as long as the pandemic is here influencing consumer behavior.  The reality of the social distancing and the inconvenience it is for those living close to other people is what is driving urban inhabitants out to the suburbs.  It is essentially speeding up long term plans.

This isn’t a forever phenomenon.  Cities will thrive, condo living in Boston will forever be a desirable location for many.  But ultimately, consumers are second-guessing their immediate plans and single families are hot right now.  We will likely see the pendulum shift back once the pandemic ends.