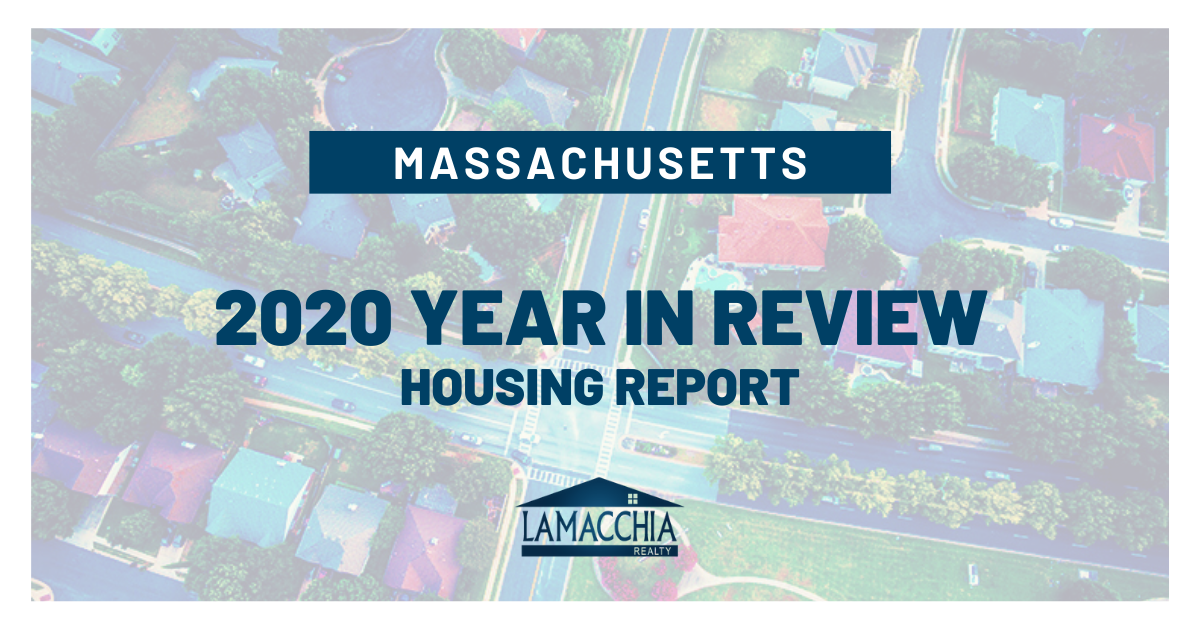 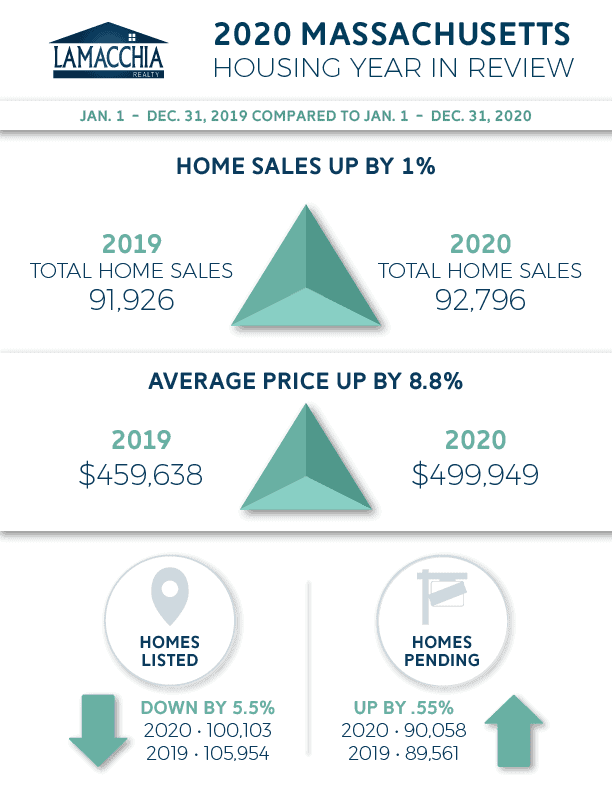 Sales Up by 1% in Massachusetts

Due to the pandemic, many feared that 2020 would see another housing crisis with prices crashing and inventory climbing through the roof, but the opposite happened as we clearly predicted in the “This Is NOT 2008” blog.

As for sales, despite the lowest inventory on record in 2020, sales still increased slightly, by one percent from 91,926 to 92,796.  This includes single families, condos, and multi-families.

Condos and multifamily sales decreased by 1.8% and 9.8% respectively, and single families increased by 3.6%. 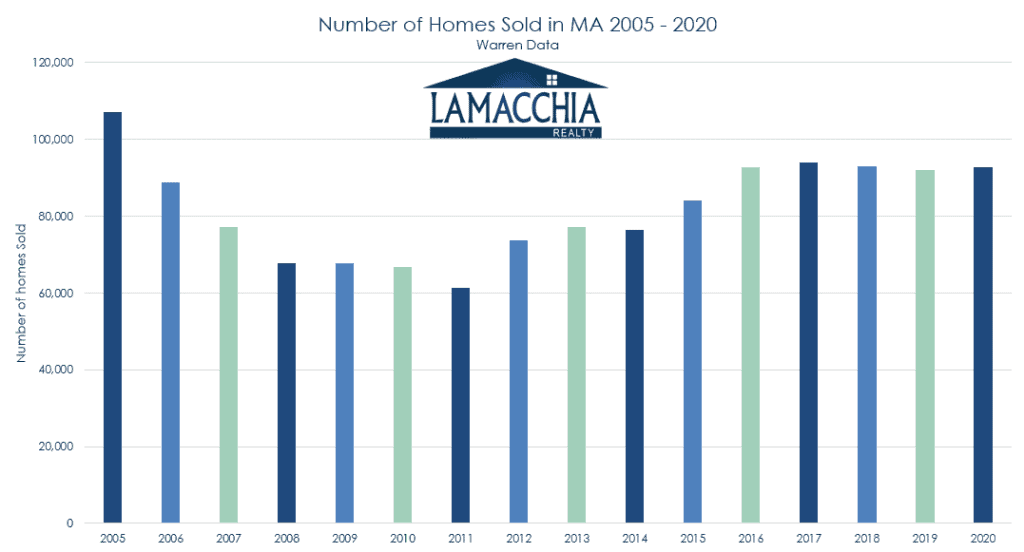 Monthly sales in 2020 compared to 2019 tells a very clear story about how the pandemic affected the real estate market. The year started off already booming, with higher sales than the year before. February and March did their best to keep up like they always do in the cold winter months when a year starts off with lower inventory than the year before, and then boom, April happened. April was a direct consequence of the shutdown in March which caused a dramatic log jam in the real estate supply chain. No one was allowed to leave their homes, sellers pulled their listings off the market and everything froze.  This lasted three months until safety measures were put in place which began to get the industry moving again. By July, the market was beginning to play catch up, and by September buyers and sellers who had to pause on their plans early in the year hit the ground running.  Fall and Winter experienced a frenzied market for buyers as supply could not keep up with demand.  There just weren’t enough listings to go around for all the determined buyers. 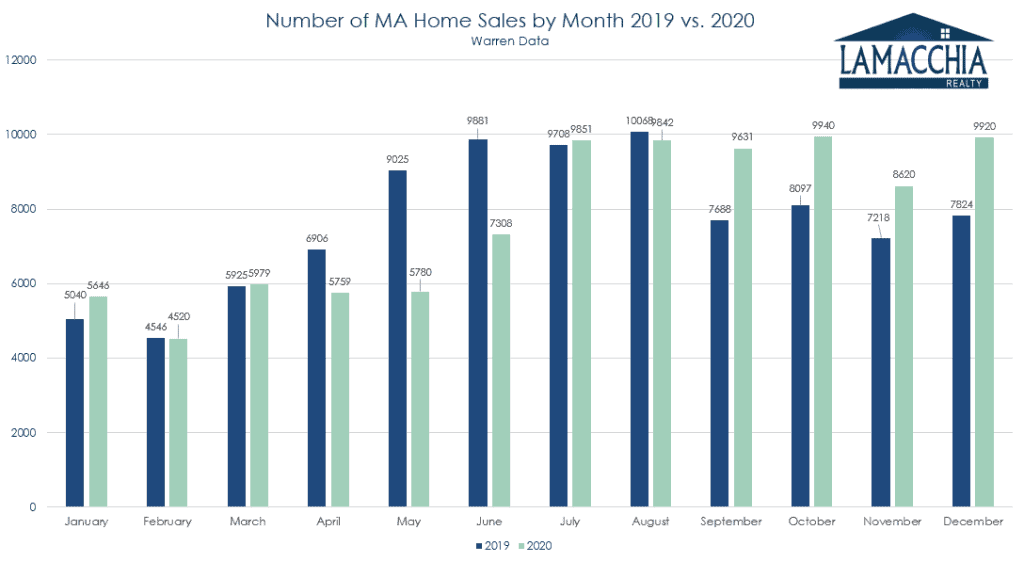 Prices Up by 8.8% in Massachusetts

If we had hit a crisis like 2008, prices would have plummeted, but once again, it’s clear that the 2020 market did the exact opposite. Prices are up almost 9%, moving from $459,638 in 2019 to $499,949 in 2020.  Prices increased in all three categories; singles are up 9.2%, condos by 9.3%, and multis by 7.7%.  Fortunately for buyers, the historically low interest rates make buying possible as it costs less to secure a home and gave buyers a little more wiggle room to offer over asking in a multiple offer situation.

Monthly prices are illustrated in the chart below comparing 2019 to 2020.

Prices in every county increased from 2019 to 2020, with the greatest increases in counties further from Boston. It’s expected that we’d see increases everywhere with prices in the state increasing by such a large percentage.  The market is intense everywhere and this shows that demand is high all over the state as buyers are willing to pay more. 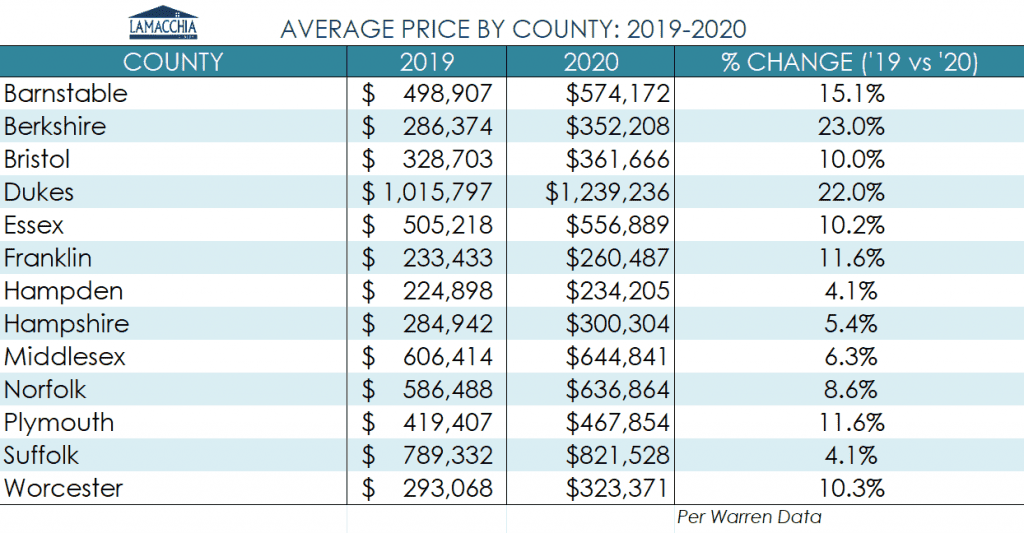 The first of January 2019 had 12,803 homes for sale compared to the first of January 2020 with 10,272.  That’s a 19.8% decrease before the pandemic hit.  2020 was already set up for tight inventory.  Every month in 2020 exhibited a lower inventory than all five years prior which is why the inventory ended up becoming the lowest on record as you can see in the chart below.

When sellers and buyers were obligated to stay home, inventory hit historic lows making this market more anemic and frenzied than ever.  Historically low mortgage rates gave buyers a bit more purchase power and kept them in the game despite the rising prices, so inventory kept moving quickly. 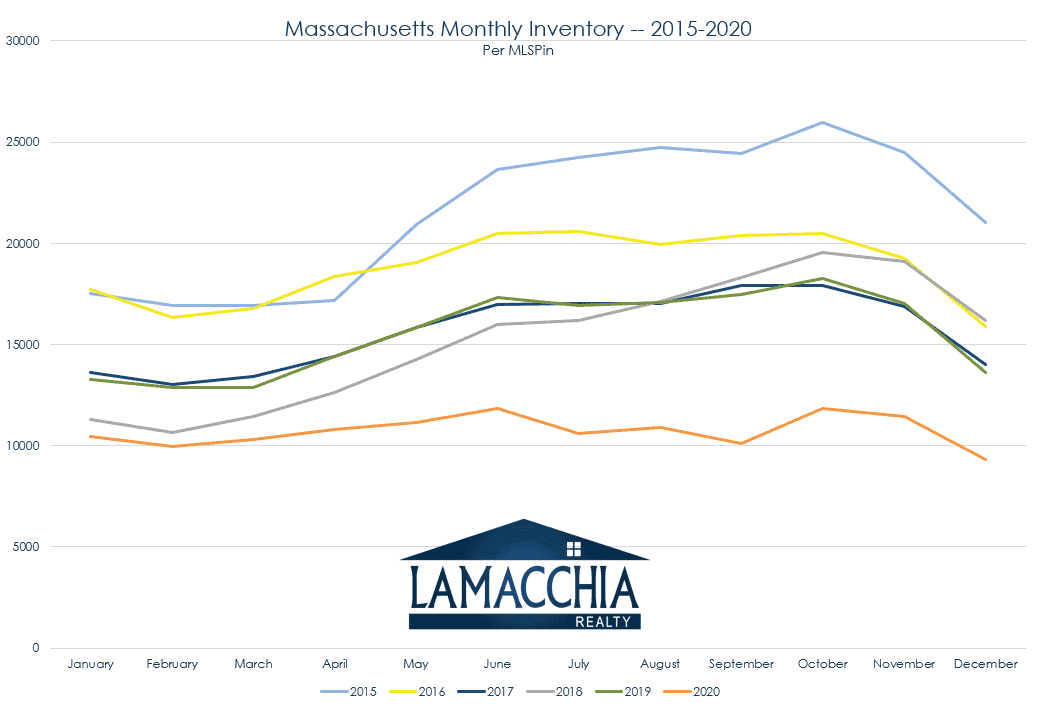 If you follow the orange line in the chart below you’ll see listed homes fell off a cliff in March, but then right around June it jumped back in line and moved above past years by mid-September as the market played an intense game of catch up. Overall, there were 100,103 homes listed in 2020 over 2019 which had 105,954- a 5.5% decrease. 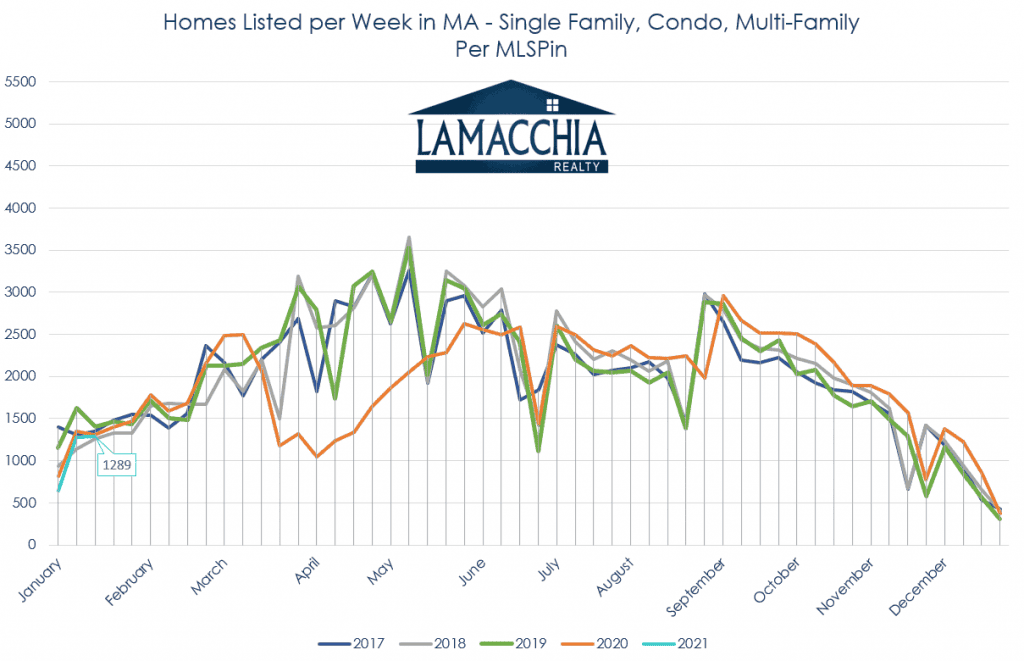 In the chart below, the number of homes placed under agreement tells a similar story to homes listed.  There was a drop off in March and then numbers beat out 2019 by Fall.  Overall, it was a slight .55% increase year over year, with 90,058 going pending over 89,561 in 2019, but with the drop from March to June it’s amazing that we are seeing an increase at all. 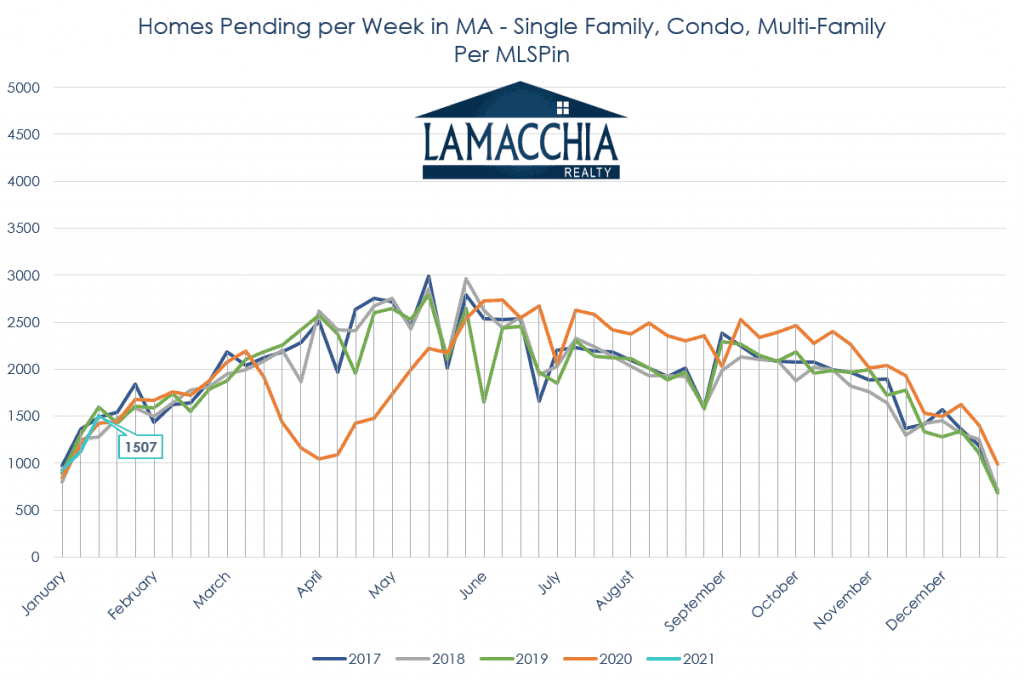 In Anthony’s 2020 Predictions it was forecasted that sales and prices would increase over 2019 and despite the pandemic that came true.  Prices increased more than predicted and sales didn’t increase as much, but still, the market caught up as best as possible.

Anthony noted recently in his 2021 Predictions that this year will be the biggest year for home sales since 2005 and that the number of homes sold will break the 100,000 benchmark.  With buyer demand still more intense than ever and sellers who are still waiting until the spring to list, this is very likely going to come true.

Loan limits having just increased along with historically low mortgage rates will help keep homes affordable for buyers despite the increasing prices.  Buyers who have been out there losing out on bidding wars will hopefully see some relief in the spring when sellers start to list.  Sellers should be advised that pricing high based on what a neighbor sold for is dangerous.  Price well based on comps and you’ll have a higher likelihood of generating multiple offers and an over asking sale price.  Overprice and you’ll miss the buyer who would be willing to make an offer as the home may be priced too high for them to compete in a bidding war.